If the lights go out, Antelope Valley-East Kern Water Agency instituted a contingency plan; the purchase of generators that will keep operations working seamlessly at the Quartz Hill, Eastside, Rosamond and Acton treatment plants, as well as the Westside Water Bank and several pump stations. AVEK also acquired some trailers to facilitate the mobility of the generators and to store additional fuel to refill those diesel engines.

AVEK continuously seeks ways to ensure that our customers water demands can be met, even under unexpected and complicated circumstances.The Agency has purchased a total of six portable 500 kilowatt  diesel generators that are used to handle extended power outages.

An analysis of AVEK’s most vulnerable areas during an extended power outage revealed that the Leona, Willow, Acton and SNIP North pump stations are essential in maintaining water pressure and supplies in the system when an outage occurs.

That reality coupled with the Public Safety Power Shutoff Policy adopted by Southern California Edition confirmed the need for this equipment.

AVEK recently applied for $109,331. In grant funds from the California Governor’s Office of Emergency Services, Grants Management Section, regarding the Community Power Resiliency Allocation to Special Districts Program – money intended to go toward the purchase of 6 diesel fuel tank trailers and associated pumping equipment. There is $20 million in the State General Fund available for the program.

Funds from the program can be used to procure fixed, long-term emergency electrical generation equipment, for the development of continuity plans, to conduct risk assessments for critical infrastructure, for the creation of post event reports and public education materials, or to purchase supplies in preparation of electric disruption.

AVEK’s funding request notes that since July 1, 2019 the Agency experienced eight power outages which totaled bout 48 hours without electricity and 75% of those events resulted from public safety power shutoffs with the remaining 25% related to wildfires. These events impacted operations at five of AVEK’s facilities – the Quartz Hill, Eastside, Rosamond and Acton water treatment plants in addition to the Westside Water Bank and four pump stations.

AVEK is in the process of developing a local Hazard Mitigation Plan with a portion dedicated to addressing power outages.

The funding request from AVEK also points out that portions of the Antelope Valley qualify as disadvantaged communities, for which funding is being prioritized.

Regarding the multi-task trailers from Thunder Creek Equipment in Pella, Iowa, they are designed to allow businesses and individuals the ability to transport bulk quantities of diesel fuel in a way that may not require them to have special licenses. The trailers are exempt from the Hazardous Materials licensing requirements in California. However, anyone operating a large-size trailer must hold a Class A driver’s license. Each of the trailers  comes equipped with a trailer jack, a solar battery maintainer, and a 12-volt fuel pump.

As the grant request to Cal OES indicates, additional power resiliency to various critical potable water facilities across AVEK’s roughly 2,400-square mile territory is needed to keep water supplies furnished to more than 500,000 people in the region, including those at Edwards Air Force Base and Plant 42, which supports the military and defense contractors. 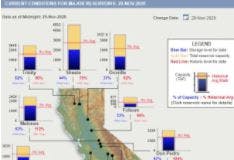 A glimpse into 2021 indicates that AVEK will be able to meet customer demands for supplemental water supplies – mainly because of the Agency’s banking program.