The California Department of Water Resources (DWR) completed seismic reinforcement work on three piers at the Castaic Dam tower access bridge this past week, shortly before the Thanksgiving holiday.

DWR’s project at that Los Angeles County facility represents continued efforts by the state agency to strengthen the bridge and, in turn, lower seismic risk at the network of State Water Project (SWP) facilities.

DWR’s news release on November 22 quoted Jason Brabec, Castaic Dam Modernization Program manager, as saying, “with the completion of the reinforced wrapping to all of the bridge’s piers, we have improved the strength and flexibility of each pier to allow for controlled movements of the bridge during a major earthquake.”

Construction crews continue work on the bridge’s superstructure that provides support for the deck and connects to the piers.

This bridge, which measures 500-feet in length, enables operations and maintenance crews to access another structure used by DWR to release water from Castaic Lake. Constructed in the early 1970s, the bridge had been retrofitted in 1998, following the 6.7 magnitude Northridge Earthquake.

In order to work on this project, the water level in Castaic Lake was lowered by more than 100 feet earlier in the year so crews could gain dry access to the piers. With certain portions of the project completed, water levels have been slowly raised in accordance with hydrologic conditions.

Lake visitors have been cautioned to be aware of fluctuating lake levels in 2022. The scope of the project is expected to be completed in Spring 2022. The program began in 2018. 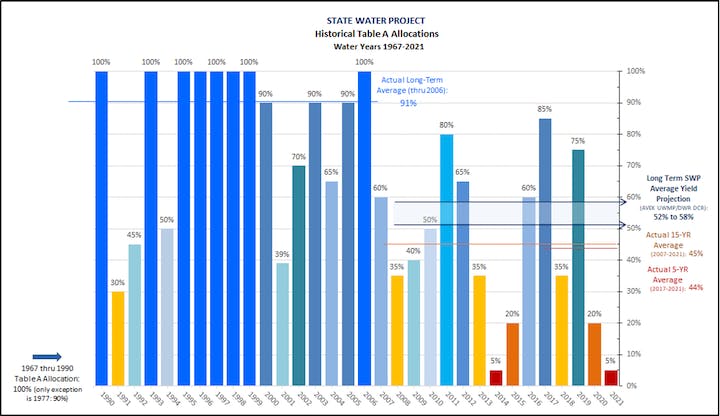 At the Tuesday, November 30 special Board meeting, AVEK General Manager Dwayne Chisam presented Directors with a very detailed report on the Agency’s long-term and short-term water supply goals which…