AVEK sends warm wishes to senior operator James Bernardi and his wife Alexandra on the birth of their baby boy, Owen Bernardi, who entered the world on August 22.

Sleepless nights have become the norm for Alexandra and James, who works at AVEK’s Rosamond Water Treatment Plant, as they adjust to being new parents. As James put it, he gets “very little sleep.” When told times will get better, he said, that’s what he’s heard, adding, “I hope sooner than later.”

Owen weighed 6 pounds, 13 ounces at birth and measured 20 inches long. “He’s very quickly gaining weight,” James said, noting the infant is a good eater. “That’s about all he does is eat.”

Regarding any interest Owen might eventually have in sports, James said, “I’ve put a little baseball in his hand already.”

Because James and Alexandra like camping and fishing, the theme for decorating Owen’s bedroom is a little campground.

Allen Morris, the plant superintendent at Rosamond, said, “We wish James all the best and good luck on being a new dad.” 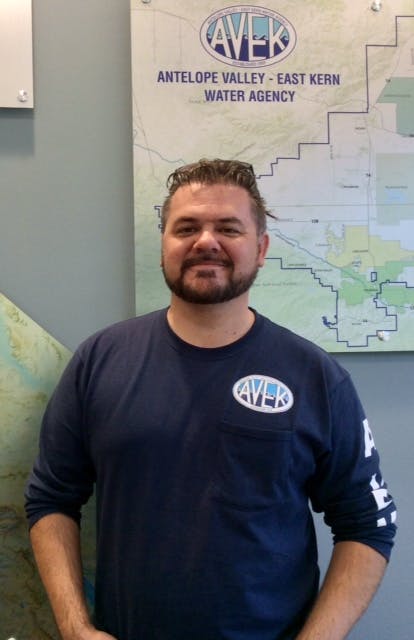 Securing employment at AVEK became a goal for Nick Humphrey, a water treatment operator that achieved his objective when he spent his first day on the job, Monday, September 28 at the Quartz Hill…