When AVEK board members conducted their Oct. 13 virtual meeting, they convened in memory of former Director Andy Rutledge at the suggestion of Director Frank Donato.

Andy, who died at age 96 on Oct. 10, had served as a board member for 26 years in AVEK’s Division 5 seat, where he was initially appointed in October 1988. He retired from that post in February 2014 at age 90. At the time of his retirement from AVEK, a huge crowd of folks that included former board colleagues, friends, neighbors, business acquaintances and former students filled the boardroom. They shared expressions of praise and admiration for the man who touched their lives in a positive way.

“The reason a lot of people are here in the audience tonight is the resolution honoring Andy,” then Board President Keith Dyas told the crowd in 2014.

“You were my principal,” AVEK’s Water Resources Manager Tom Barnes told Andy that night. Tom had attended Valley View Elementary School, one of the many sites where Andy worked.

Former AVEK Director George Lane, who served as Board Vice President at that time, participated via teleconference. “I’ve enjoyed our friendship,” he told Andy.

Former AVEK Director Marlon Barnes praised Andy for the passion he displayed in his work.

For 12 of Andy’s 26 years with AVEK, he sat in the president’s seat. When he stepped down from AVEK, he had devoted a total of 60 years to public service in the community. So at age 90 he decided to move on and spend the remainder of his days ranching in Idaho.

Andy was born on Sept. 21, 1924 in Mineral, Texas – the third of six children born to Andy Sr. and Maggie Rutledge.

In 1930, at age 6, Andy moved with his family to New Mexico, in a journey that took them about two years because of vehicle failure and the need to work in cotton fields, which provided them with travel funds.

Along the way they homesteaded during a stop in Coyote, New Mexico, where Andy attended a one-room schoolhouse, a structure that formerly served as a water station for steam locomotive trains. Eventually they reached their destination in Hatch, New Mexico.

The 1943 draft transported Andy from civilian life to the military as a member of the Army Air Corps in World War II. His service as part of The Greatest Generation involved piloting a Lockheed P-38 Lightning, a piston-engine fighter aircraft. He also served in the Quartermaster Corps in Cheyenne, Wyoming and on the Island of Saipan during the Pacific campaign until the war ended.

In Cheyenne he met, at a church function, the woman he would spend the rest of his life loving, Elizabeth Young. Andy was 21 when they wed on April 7, 1946, a union that lasted more than 74 years until his death. Early in their marriage they had son Randy and daughter Beth.

With military service behind him, Andy earned a Bachelor’s degree in Agriculture and a Master’s degree in School Administration from New Mexico State University. In 1957, Andy, Elizabeth and their children relocated from Hatch to Lancaster.

Andy worked as a principal in the Westside School District for 28 years and retired in 1986. Then, in 1987, he accepted the position of superintendent for the Lake Hughes School District. He is survived by wife Elizabeth; son Randy (Jeanne) Rutledge; daughter Beth (Chip) Davis; sisters-in-law and brother-in-law; grandchildren; great grandchildren; generations of nieces and nephews; extended family members and friends. 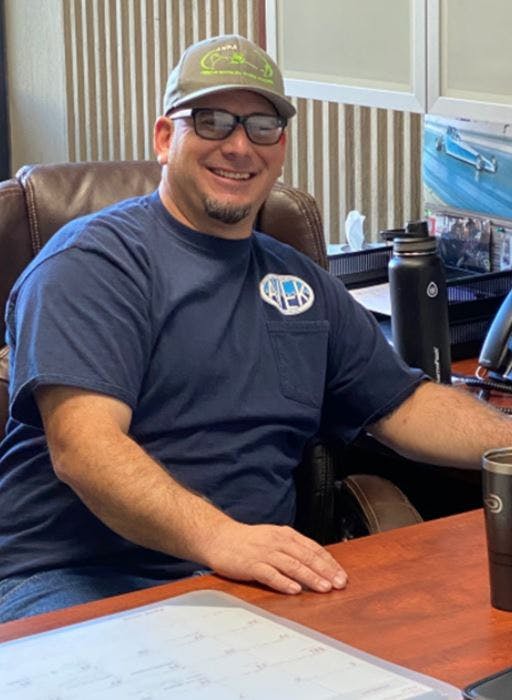 Meet Steve Olmscheid, AVEK’s maintenance supervisor, who believes in the ethic that states hard work leads to success on the job and he certainly exemplifies that philosophy every single day.