If wishing makes it so, then life has gone according to plan for AVEK’s most recent hire, Sebastian Molina, a Water Treatment Plant operator.

Sebastian, a Lancaster resident, began his first day with the AVEK family on October 18 at the Rosamond plant, but eventually will transfer to the Eastside plant. Water industry issues in California, both quality and supply, captured his attention and he wanted to focus his time and energy in that field.

Sebastian decided to apply for a position at AVEK because, he said, “I wanted a better opportunity and I really enjoy being an operator.”

Prior to hiring on at AVEK, Sebastian worked for what he described as a “small municipal water company” in the desert community of Adelanto. PERC Water Corporation, established in 1998. Sebastian received both T2 and D2 certifications, meaning that he meets basic state requirements for working at a drinking water treatment facility.

His function is protecting the public from contaminated supplies. His tasks include adding chemicals to disinfect the water; inspecting equipment on a regular basis; monitoring meters; and testing water samples.

Raised in Lancaster, he was born in Bellflower. His wife is Brittany. Their 3-month-old daughter is Bridgette. Their dogs are Apollo, 11 years; Maggie, age 3; and Marcus, 3.

He enjoys cycling, golfing and football. 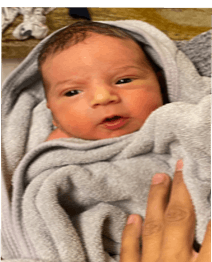 Listen closely and you will hear the smile in her voice. Diana Mills and her husband T.J. are the proud grandparents of the newest member of the Mills family – Jaxon Liam Mills, who entered the world…